Reducing pollution from fossil fuel extraction should be a priority of any state extraction policies. If resources are extracted in Illinois, the operators should fully fund efficient and effective permitting, inspection, and enforcement programs as well as any costs related to pollution or environmental damage caused by these operations.

Coal underlies 65% of Illinois—as demand for Appalachian coal declines, Illinois communities are facing a surge of new coal mining. The risk imposed on those living in Illinois coal mining communities is increased even more due to deficient permitting and enforcement programs that grant industry lax and inexpensive requirements. Coal mining pollutes water, damages or destroys prime farmland, and pollutes our air. Illinois regulatory agencies regularly grant permission to mine through streams and wetlands, which also threatens water quality downstream. Underground long-wall mining intentionally subsides thousands of acres of land, which impacts groundwater and surface streams, water wells, prime farmland, and roads.
The coal industry should be responsible for funding adequate inspection, permitting, and enforcement program as well as any damages to the state. While Illinois has a proud history of being one of the first states with a surface reclamation law, the impacts of mining on the state have been permanent and devastating. We must learn from this experience and make the protection of water resources a priority. Dams on small streams for coal should no longer be allowed. Coal ash and coal ash ponds should be adequately regulated by IEPA rulemaking. Coal impoundment should require financial assurance. Finally, slurry ponds should be prohibited from using waters of the state as treatment work and being able to remain permanently under SMCRA.
Read more
As families retreat from mining impacts, the rural network of long-time farm families in Illinois is destroyed. Towns become dependent on the boom and bust coal industry. When the coal is gone, the mining employment ends, leaving a toxic legacy of coal waste for future generations. If mine companies go out of business with insufficient bonding, state and local communities are faced with cleaning up the abandoned mine land.
Outdated pollution control technologies do not remove pollution in waste-water or site runoff before it is discharged into rivers, streams, and lakes. Coalmines utilize millions of gallons of fresh water each day at each mine to wash the coal. The highly polluted waste-water, or coal slurry, is stored permanently in large impoundments, often exceeding a billion gallons of toxic liquid, which can leak and contaminating surface and/or groundwater. Additionally, coalmines contribute to air pollution from emissions of particulate matter and gases, including methane, sulfur dioxide, oxides of nitrogen, as well as carbon monoxide. High levels of suspended particulate matter increase respiratory diseases such as chronic bronchitis and asthma, while gaseous emissions contribute to respiratory, cardiovascular, and cerebral problems.
Coal ash contains heavy metals—such as mercury, arsenic, selenium, chromium, and cadmium—that can migrate into groundwater, lakes, rivers, and drinking water, threatening fish and other wildlife, and causing cancer and brain damage in humans. Some 4.4 million tons of coal ash are generated in, or imported into, Illinois each year and contaminants from coal ash have been recorded in the groundwater at 22 out of 24 coal-fired power plants investigated by the IEPA. A high percentage of Illinois fish samples exceed the safe mercury limit. Furthermore, fly ash particles (a major component of coal ash) in the air can trigger asthma, inflammation, and immunological reactions in humans. Studies link these particulates to heart disease, cancer, respiratory diseases, stroke, and silicosis (scarring of lung tissue), which can result in lung disease and cancer. Lastly, the heavy metals and radioactivity in coal ash may increase the harm caused by inhalation.

Oil and Gas Pollution in Illinois

Natural gas development via hydraulic fracturing leaves extensive environmental degradation in its wake. Fracturing a single deeper horizontal shale well can use anywhere from 2 to 10 million gallons of water. This can result in ecological impacts to aquatic resources, as well as the de-watering of drinking water aquifers. A variety of chemicals—many known to be toxic to humans and wildlife—make up 0.5% to 2.0% of the total volume of fracturing fluid. When millions of gallons of water are being used, however, the amount of toxic chemicals per fracking operation is very large.
Human exposure to fracking chemicals can occur by ingesting chemicals that have spilled and entered drinking water sources, through direct skin contact with the chemicals or wastes, or by breathing in vapors from flowback wastes stored in open pits or tanks. Contamination of soil and surface waters can occur due to spills during transportation, fracturing operations, and waste disposal, resulting in fish kills and death of other aquatic fauna, and tainted watersheds and waterways.
Read more
Methane leaks resulting from natural gas production are a significant source of greenhouse gas emissions. Approximately 25% of human caused global warming is caused by methane emissions, and the largest source of industrial emissions is the oil and gas industry.

Sand mining in Illinois is gearing up as the great “frac sand rush” that engulfed Wisconsin and Minnesota makes inroads in Illinois. In fracking operations, sand is mixed with water and chemicals, then injected underground to break apart rocks and unleash trapped oil and gas. The best sand for fracking has quartz grains that are relatively pure, hard enough to withstand pressure, and round enough to allow natural gas to flow around them easily. This kind of sand is not common, however, some of the world’s best deposits occur in the Midwest, with abundant supplies in northern and central Illinois. And as the fracking boom has taken off, so has demand: “frac sand” production could climb 30% from 2013 to 2015, an increase of about 95 billion pounds of sand, according to industry projections.
Frac sand mining threatens Illinois state parks and perhaps the entire Illinois River Valley, which could do serious damage to the fragile ecology of those areas. Negative impacts of these sand mining operations include: noise and dust from blasting and trucks; light pollution from mining operations; disturbance of flora and fauna; destruction of wetlands; drawing down and pollution of water resources; destruction of productive top soils needed for agriculture; and exposure to toxic chemicals and airborne particulate matter. Moreover, the sand is like tiny shards of glass that can lodge in the lungs, a condition similar to asbestosis.
Mining frac sand also requires the use and discharge of millions of gallons of water into nearby creeks and streams. The force of the flow of water can blow out smaller waterways and introduce more pollution into pristine areas, like waters that run through state parks. This degrades waterways, can choke sensitive aquatic life like mussels with silt, and erodes important habitat for riparian wildlife.

Since the early 1990s, new surface impoundments have been required to be lined. There are also requirements for groundwater monitoring well systems and hydrogeologic assessments at facilities. Further, where groundwater contamination has been found, cleanup/remediation is required. IEPA groundwater standards also contain stringent non-degradation requirements.

There are 24 power plants in Illinois with a total of 83 impoundments and one permitted landfill where coal ash is disposed. There are also older ash ponds at many of these facilities. Starting in 2008, IEPA initiated an aggressive strategy to assess the vulnerability of groundwater at power plants with near-by potable wells to determine the potential contamination threat to those wells.

Beneficial reuse–used in the manufacture of cement, concrete blocks, wallboard, snow and ice control, aggregate in cement, soil stabilization and as a sub-layer in road construction.

Signed into law on June 17, 2013. The result of extensive negotiations among industry groups, environmentalists, state legislators, and state agencies, it is one of the most stringent laws on hydraulic fracturing in the nation.

With gas prices skyrocketing, the need for increased investment in clean energy has never been greater. To understand the current situation and what needs to... 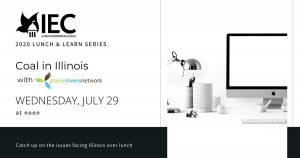 State can now go beyond the federal government to take action on climate change SPRINGFIELD — On Thursday, March 28th, the Illinois State House of Representatives... 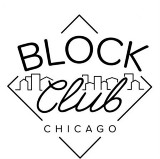 Block Club Chicago | by A.D. Quig “If the tax break is approved, the property would be assessed at 10 percent of its market value...

Texas-based Dynegy Inc. has launched a two-pronged assault on our environment, public health, and ratepayers. In the past few weeks, Dynegy requested that the Illinois... 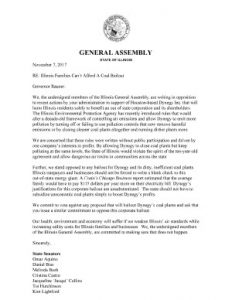