Illinois ranks second in the Midwest for installed renewable power capacity and fifth in the nation for installed wind power capacity. We also rank third in the nation for ethanol production capacity and fourth for biodiesel production capacity. Our approximate installed renewable energy capacity includes: 3,667 megawatts (mW) of wind power; 53 mW from solar photovoltaics; 40 mW from hydropower; 149 mW from biomass and waste.

In December of 2016, the Future Energy Jobs Act (FEJA) was signed into law. This bill not only fixes the existing Renewable Portfolio Standard to ensure that Illinois builds new clean energy resources, it will also open up opportunities to people in low-income communities who too often have been shut out of participating in the clean energy economy. FEJA will invest more than $750 million in low-income programs, including new Illinois Solar for All Program to prioritize new solar development and job training in economically disadvantaged communities. Specific programs will deliver consumer savings, economic development and job training and creation for ex-offenders and former foster children.

Illinois is at a crossroads. We are transitioning beyond dirty fossil fuels, and a growing clean energy economy could build new economic opportunities across the state, reclaim polluted land, and create thousands of jobs. This new vision for Illinois hit a historic milestone when we passed the Future Energy Jobs Act (FEJA) in 2016. The law becomes effective June 1, 2017.

Renewable Energy Provisions
It fixes funding for Illinois’ renewable energy law, which mandates that 25% of ComEd’s and Ameren’s power come from renewable sources, such as wind and solar, by 2025. For years, the Illinois Power Agency – the state office in charge of managing the utilities’ power purchases – has bought renewable energy with the help of a small charge on the supply side of Ameren and ComEd bills. That’s the portion of the bill that covers the price of the actual electricity you use.

While the Future Energy Jobs Act does not increase funding for renewable energy, it makes a major improvement: It moves that charge to the delivery side of electricity bills. This means that the Power Agency can collect and invest funds much more easily. Also, the Act requires at least 4,300 megawatts of new solar and wind power – enough electricity to power millions of homes – to be built in Illinois by 2030. Never before has Illinois had such a requirement for homegrown renewable energy projects.

Illinois’ RPS requires specified electric utilities and suppliers to get a certain percentage of electricity from renewable sources. According to this law, renewable sources must make up 25% of overall electric sales by 2025, with wind energy accounting for 75% and solar accounting for 6%. Due to the way municipal aggregation and Illinois’ deregulated energy market interact, the state is currently not on schedule to reach the RPS targets. In fact, renewable energy development in Illinois has essential ground to a halt. A statutory fix is required to simplify the process and get us back on track. A full fix to the RPS wasn’t passed in 2014, but in June 2014, Illinois’ governor signed a bill to allow the Illinois Power Agency to spend $30 million on new, distributed photovoltaic (PV) power. Over the next year new rooftop solar systems will be installed as a result, proving that a fixed RPS could reinvigorate the clean energy economy in Illinois.

A robust self-funded program that provides rebates for residential/commercial and non-profit/government solar and wind energy systems. The (max) $10,000 cash rebate is awarded on a first-come first-serve basis until the program is out of funds for the fiscal year. The program is funded through the Renewable Energy Resources and Coal Technology Development Assistance Charge and does not impact the state budget. The program is mandated by law until 2015.

Since 2008, electric utilities (ComEd, Ameren, MidAmerican) must offer customers credits on their electric bills for electricity generated by renewable energy systems. Eligible renewable generators of 40 kW or less receive a one-to-one retail rate credit. These customers are compensated for excess electricity generated by their renewable energy systems at the same rate that they pay when buying electricity from their utility. Customers with eligible renewable generators between 40 kW and 2 MW receive credits equal to the utility’s avoided cost for their excess generation.

Municipal electric aggregation allows municipalities, counties or townships to purchase electric loads to facilitate the sale to residential or commercial businesses within the municipality or unincorporated areas. Approximately 91 communities in Illinois have achieved “100% renewable energy” with the purchase of renewable energy credits (RECs) through Community Choice Aggregation (CCA).

On the heels of the release of Chicago's Climate Action Plan, IEC will break down what’s in the plan, what’s not and what more needs...

With gas prices skyrocketing, the need for increased investment in clean energy has never been greater. To understand the current situation and what needs to...

A decade ago, the City of Chicago under the Emanuel administration dissolved its Department of Environment, leaving a broad range of environmental issues to be... 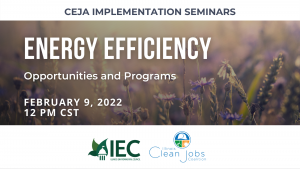 Join IEC and the Illinois Clean Jobs Coalition for a Lunch & Learn focused on the current landscape of energy efficiency in Illinois. This Lunch... 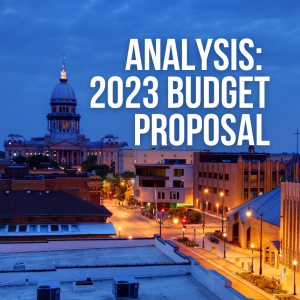 Gov. JB Pritzker unveiled his 2023 budget proposal. Check it out to see how and which environmental priorities will be funded next year.