Did Illinois just elect the most pro-environment General Assembly ever?

The winners of yesterday’s election will be making decisions that have wide-ranging impacts on Illinois’s environment.

The winners of yesterday’s election will be making decisions that have wide-ranging impacts on Illinois’s environment. While several Illinois legislative races still have yet to be called, IEC is excited that many environmental champions, at every level of government in Illinois, were elected. It is now up to our community to set bold goals for environmental progress, and hold elected officials accountable to achieving meaningful progress.

Throughout the campaign, IEC worked on a bi-partisan basis with candidates to educate them on environmental issues and build them into environment and clean energy champions. As a result, this may prove to be the most pro-environment General Assembly ever elected in Illinois. 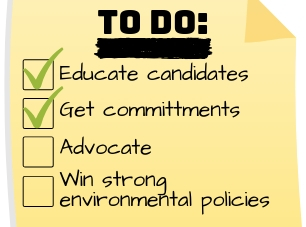 Below are some notable results thus far:

Last night Governor Rauner lost the gubernatorial election to Governor-elect J.B. Pritzker. While the environmental community worked with Governor Rauner on issues such as clean energy, lead in drinking water, and the VW settlement, we also had deep conflicts on emissions from coal plants and mines. The two-year budget impasse also caused significant damage to environmental programs, and staffing and enforcement actions at agencies dropped substantially.

Governor-elect JB Pritzker has committed to signing on to the US Climate Alliance, working towards a goal of 100% clean energy by 2050, taking action on the coal ash crisis on the Vermillion River, and above all, in briefings he has committed to work with the environmental community as an important stakeholder.

Democratic State Senator Kwame Raoul defeated Erika Harold in the Attorney General’s race, marking a significant victory for the environmental community. Erika Harold did not attend the IEC Annual Leadership Dinner and once headlined a rally for the coal industry.

AG Lisa Madigan provided strong leadership on environmental issues, and the transition will be tough, but Senator Raoul was a strong sponsor of the Future Energy Jobs Act and brought forth important legislation to rectify issues of standing in environmental challenges to state-issued permits. Senator Raoul has committed to stringently enforce environmental laws as attorney general.

There are still several races that have not been officially called in the Illinois House and Senate. Still as of the drafting of this note, the Illinois House and Senate will have super-majorities of Democrats in both chambers. Several new environmental champions ousted lawmakers who were against or indifferent to environmental protection, and we are looking forward to introducing them to their constituents in the coming months.