With a little over two weeks left until the deadline for session to end (May 31), the environmental community’s largest issues are still moving.  Yesterday, a story about the fix that we are supporting to Illinois’ renewable energy portfolio standards was on the front page of the Chicago Tribune. The fix to the RPS is still very much in play as the end of session nears; many big energy issues are not resolved until the very last days of May.  Read the Trib article and then take action on this important issue.

Another priority issue, recreation liability, continues to move forward as well.  Talks on this issue continue and I will update you as soon as this important proposal solidifies.  There is still much work to be done in the next few weeks.  Thanks for your interest and support of our work.

On Bill Financing for Multi-Family Housing

CNT Energy worked with housing and environmental groups this year to put together SB2350.  This bill expands the on bill financing program for energy efficiency run by the utilities to include multi-family housing.  This bill was supported by environmental groups and housing groups.  Pictured to the right is Anne McKibbin of CNT Energy and Rep. Art Turner, the lead House sponsor of SB2350. 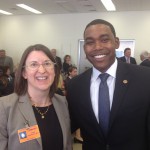 HB3319 passed out of the Senate Environment Committee this past week.  This bill was an initiative of the Illinois Stewardship Alliance.  This bill expand the on farm composting permiting exemption to include additional forms of agricultural waste and allows farmers to take up to 10% food scrap to enhance their compost operations.  This provides new opportunities to create compost to be used on farm.  In addition, HB23335concerning urban and suburban on farm composting passed out of the Illinois Senate today.

Take Action with our Affiliate Organizations

Food and Water Watch, IEC, AARP, and CUB have all been working together to oppose HB1379 which would both raise rates for consumers and take control of water resources away from the public.

Contact the Governor about to deny variances to Ameren and Dynegy coal plants through Environmental Law and Policy Center.

The Illinois Pollution Control Board granted Ameren a variance from state law last fall, giving the company five more years to clean up its coal plants. Ameren is now trying to unload those same dirty coal plants, despite repeated claims of its commitment to Illinois and the communities where its plants operate.  Read more and take action through ELPC.

Get IEC updates sent directly to your inbox
and stay current on all the environmental news in Illinois.

As we look ahead to the spring session, we will be working with the new General Assembly on key environmental priorities, while protecting environmental programs from budget cuts against a challenging fiscal environment.