Illinois Has the Greenest Cannabis Bill in the Country 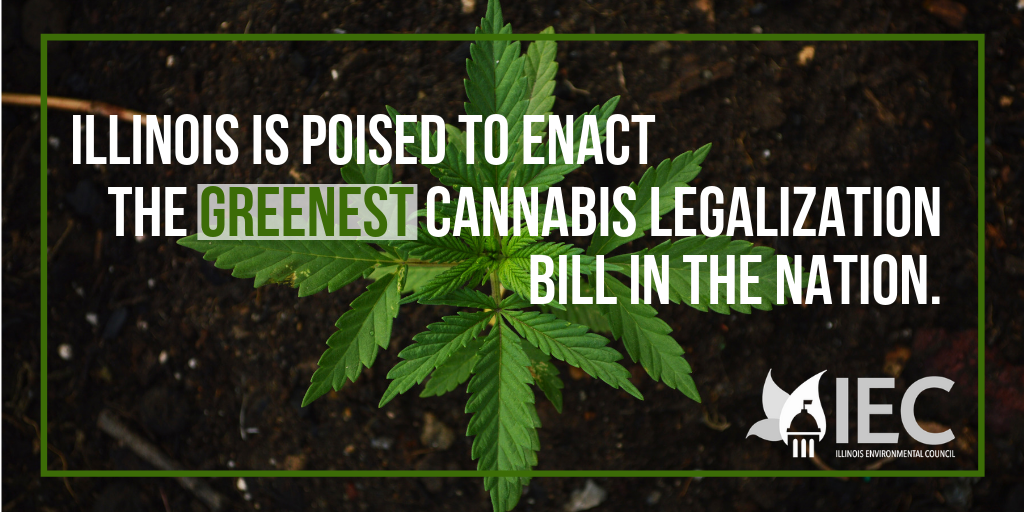 With input from the environmental community, Illinois is about to become the national leader for environmental protection in the cannabis industry.

Earlier this year, Governor Pritzker along with members of the Illinois General Assembly, including chief sponsor Senator Heather Steans, introduced legislation to legalize recreational cannabis cultivation, sale and use in Illinois. For many this was no surprise, as it followed a round of state elections in which the legalization of recreational cannabis was a topic of hot debate, but polling showed it was supported by the vast majority of Illinoisans. Proponents of legalization have argued that ending the war on drugs is an important policy goal and a properly designed tax structure could allow cannabis to fund valuable state programs such as public education. But one issue has remained – is the ‘green’ industry really all that green-friendly? Let’s take a look at a few topics on this question.

While cannabis can grow outdoors, for security reasons, it will only be legal to grow indoors in Illinois – this is a common decision by states that have legalized cannabis. Unfortunately, a typical 5,000-square-foot indoor cannabis cultivation facility uses 66 times more energy than the average U.S. household. This energy usage adds up. In 2018, cannabis cultivation accounted for 4% of Denver’s electricity consumption. In Illinois a similar outcome could lead to enough electricity demand that the state unnecessarily uses the equivalent of an entire power plant for this purpose. Until the electricity sector is 100% renewable, unnecessary energy usage comes with a significant environmental price tag.

Additionally, cannabis cultivation can be highly water intensive. Cannabis cultivation requires more than 4 times the water needed to grow an equivalent amount of wheat and 11 times what is needed for corn. An improperly designed facility can waste vast amounts of water, especially if management is not diligent about usage.

Moreover, waste is also a concern. Creation of certain cannabis products, such as the extraction of THC, can generate toxic waste during manufacturing. Managing this properly needs to be a public health priority – toxic waste is responsible for serious public health problems. Butane extraction of THC, for example, can cause carcinogenic emissions.

As Illinois is pushing towards a clean energy and low waste future, cannabis cultivation and processing has the potential to push us in the wrong direction. But there are ways to avoid this. By using energy efficiency technology, water conservation systems, and waste reduction techniques, any environmental impact can be significantly reduced.

Before the legalization push took off, the Illinois Environmental Council recognized the opportunity to avoid the negative environmental impact of cannabis legalization, and partnered with The University of Chicago’s Abrams Environmental Law Clinic to develop legislative language that created nation-leading standards for Illinois with a workable administrative framework specifically crafted for Illinois. This proposal included reporting of energy usage, coordination with utilities to maximize energy efficiency and renewable energy programs, technology standards for lighting and ventilation, waste reduction and recycling standards, and other plans to protect public health and the environment. Much of IEC’s proposal has since been incorporated into the latest draft of the cannabis legalization bill, including standards for energy efficiency, data reporting, water conservation practices, waste management practices and other tools for the protection of the environment and public health.

Key Provisions of the Bill & How They Impact the Environment

As it is drafted, the bill creates a regime in which anyone who wishes to open a cannabis business in Illinois must apply for and receive a permit from the Department of Agriculture. Applicants for cannabis cultivation and craft grower permits will be required to submit plans detailing how they will recycle, manage waste, use energy efficient technology, and conserve water. This is a big deal. Included in these requirements, we can expect top-tier environmental protection standards such as the use of best-in-class energy efficient lighting systems, a comprehensive plan to use recyclable packaging materials and actually recycle those materials properly, minimized water runoff controlled by high-tech drip watering appliances, and climate control systems that filter any wastewater prior to discharge. Moreover, if the law is implemented properly, the Department of Agriculture will be reviewing these applications to ensure that applicants are doing more than checking boxes – they are proving themselves capable of doing the work properly. What’s more, many of these measures can actually save businesses money; by reducing waste and cutting utility bills, this regime has the potential to be a win-win for our State.

Similar standards are required in the application plans for cannabis processors and transporters, where applicable.

Once the plans are submitted by cannabis permit applicants, following those plans becomes a binding requirement for any permit issued by the State. In other words, applicants are required to specify their plans for environmental protection, and if an applicant says “I will use Energy Star Qualified LED lighting to save electricity”, they will be legally obligated to do so.

Additionally, reporting data on energy usage will be required for cannabis cultivators and craft growers. This was a key ask of the environmental community that is both simple in compliance and powerful in effect. In Chicago, we have seen significant environmental benefits created by a similar data reporting program. Chicago’s energy benchmarking ordinance, which requires municipal, commercial, and residential buildings 50,000 square feet and larger to track energy use and report to the city annually, has decreased energy usage in those buildings by simply using disclosure. If the state were to have accurate data on the cannabis industry, state energy policy programs could identify those sites using higher than average energy usage and help them reduce energy, saving money and reducing carbon emissions. As discussed above, given the huge energy demands of cannabis cultivation, these reporting requirements may help to avoid a large amount of unnecessary pollution created by electricity generation.