The Governor of Illinois has significant influence over environmental programs and policy, as well as if, and how, the state leads on these issues. This being the case, IEC welcomed the election of Governor Pritzker, whose campaign promised 100% renewable energy, clean air protections and recognized the importance of our water resources. Now that we are 100 days into his first term, IEC would like to reflect on the progress Gov. Pritzker has made on our community’s priorities.

Within weeks of being sworn in, Gov. Pritzker made it clear he is committed to addressing climate change by signing Illinois on to the U.S. Climate Alliance. IEC Executive Director Jen Walling introduced the governor at the signing event. Click here for our report. As part of upholding the Climate Alliance commitment, Illinois EPA launched a new website that tracks our state’s greenhouse gases and energy consumption.

In addressing dirty fossil fuels, Gov. Pritzker’s administration has taken steps to slow Gov. Rauner’s weakening of the multi-pollutant standard for Vistra’s coal fleet. Important discussions have also been held with IEPA and other stakeholders regarding Senate Bill 9, legislation that would begin to address Illinois’ coal ash crisis. We also have substantial work to do with the Governor’s Office and executive agencies to reform mining and hydraulic fracturing regulation in Illinois.

Once budget issues and the capital plan get resolved, we hope that climate and clean energy policy become the governor’s next priority.

With your help, our community successfully advocated to get qualified individuals appointed to critical positions for environmental protection. Examples of these appointments include Illinois Department of Agriculture Director John Sullivan, Illinois Department of Natural Resources Director Colleen Callahan and Illinois Environmental Protection Agency Director John Kim. Additionally, Carrie Zalewski has been named the new Chairman of the Illinois Commerce Commission, marking a strong choice for a critical role in achieving our clean energy goals and ensuring ratepayer protections.

We applaud Gov. Pritzker for consulting with our community on all these appointments. Our community has enjoyed in-depth meetings with all of the aforementioned directors, and looks forward to an open and collaborative relationship based on solving environmental issues.

Under Gov. Pritzker, IEPA issued the first ever green bond, expanding the amount of funding and resources available for communities to improve water infrastructure.

The governor has also acknowledged the need for action on the issue of Asian carp migration and short-term structural solutions. However, it is imperative that the governor commit Illinois to be the non-federal sponsor for preconstruction, engineering and design of the Brandon Road project to keep Asian carp out of Lake Michigan.

In his first 100 days, Gov. Pritzker introduced a balanced budget that adequately funds environmental programs and increases staffing at agencies, while not relying on fund sweeps. Click here for our analysis on the proposed FY20 budget. We are particularly pleased to see a fee on carryout bags and a reference to the economic impact of investment in clean energy included.

Under Director Sullivan, the Department of Agriculture is partnering with our community on a new, state-run cover crop program, finalizing industrial hemp rules and implementing environmental protections. In budget hearings, the director committed to seek funding to incentive conservation cropping. Further, the department rushed to finalizing our industrial hemp rules, making it possible for growing to begin this summer. And in exciting news for urban farmers, the department announced a new urban agriculture position to assist and promote this growing industry.

The Department of Agriculture has also issued new restrictions on dicamba, a volatile pesticide threatening crops and our land resources. While we would prefer stronger restrictions, we welcome the creation of new label requirements, which will limit the time dicamba can be applied, and new limitations on application near natural areas.

Department staff also helped to solve a longtime issue faced by the Cook County Forest Preserves by issuing an emergency rulemaking to support their conservation job training program. This important change will support the program’s work to provide green industry job training to those that might have barriers to employment.

The next month is an important one for the Pritzker administration and the General Assembly. We’re hoping to see a capital plan that emphasizes environmental protection and prioritizes public transit, clean water and land conservation. The FY20 budget should rebuild agencies and emphasize hiring much-needed staff at IDNR and IEPA. As soon as session ends, IEC will begin working with agencies on our non-legislative priorities and our hopeful about what we can accomplish. 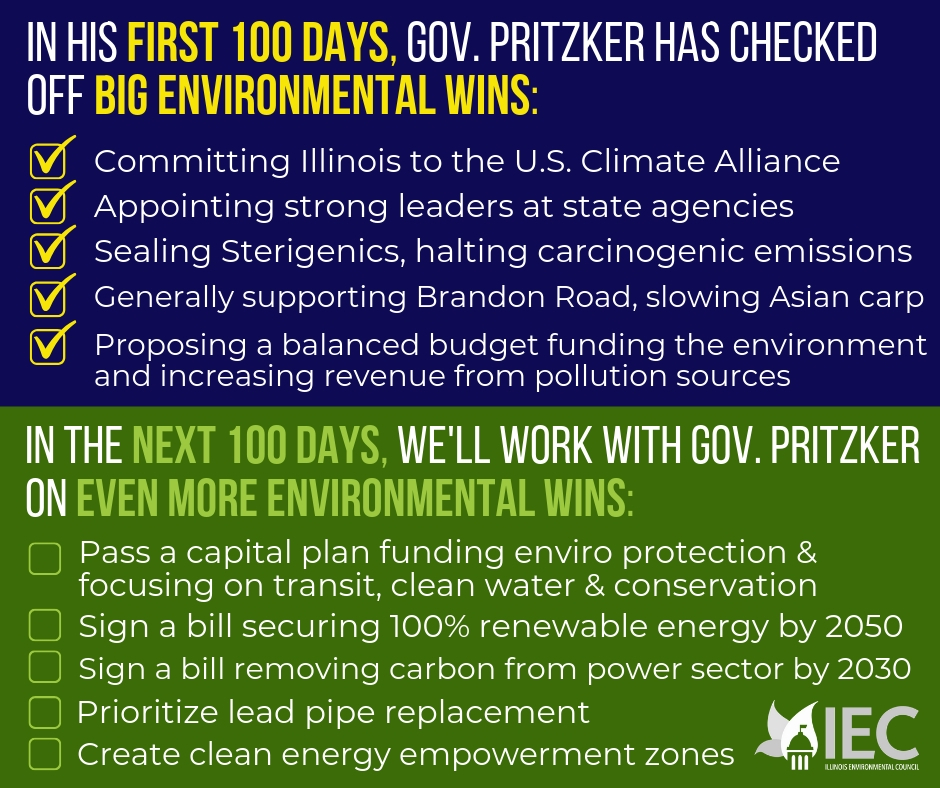